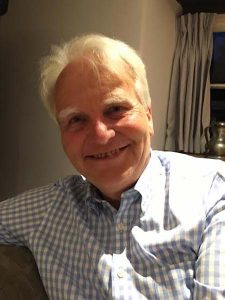 In addition to my role on the parish council, I am a member of The Community Area Traffic Group (CATG), which meets four times a year to discuss, plan and fund improvements to village roads in the local area. CATG has funded the new 30 mph and 20 mph signage in Ogbourne St Andrew, and the white gates at the north and south entrances to the village on the A346. We are currently awaiting the outcome of a request which we have submitted to CATG to repair and extend the hardstanding near to Crawlings Piece, where refuse and recycling bins are placed for emptying.

I am on the governing body of Ogbourne Academy and I am a member of the staffing committee of The Excalibur Multi-Academy Trust.

Janice and I both worked for some thirty years in Shrivenham at the Royal Military College of Science, which later became the Defence Academy of UK. I lectured in engineering and Janice lectured in polymers and fuel technology. We have both now retired.

Since retiring as well as being on the parish council, I have become a governor of Ogbourne Academy and volunteer in the Cancer Research Shop in Marlborough. On Mondays, we look after our two grandchildren in Woodborough. We spend Tuesdays recovering.

The parish council seeks to maintain a happy and well-ordered environment for all. We have focused a fair amount of our effort on the traffic problems in the village, but we also concern ourselves planning issues, village amenities and maintenance, environmental issues and any other local topics which arise.